J.M.W.T.
Surrounded by security.
Victoria, you challenge me,
I shall shortly come to thee.

A banker has just shot his manager and in less than thirty seconds of the police arriving on the scene confesses to the murder. Bored out of his wits with paperwork and thirsting for a suitably engaging case, Detective Superintendent Peter Diamond is quick to get involved when the arrival of a mysterious verse in the press presages the theft of the Penny Black, the world’s oldest and most valuable postage stamp….

Meanwhile, local Bathian Shirley Ann-Miller finds her way to the crypt of The Church of St. Michael with St. Paul, where a weekly meeting of The Bloodhounds, an intimate group of lovers of crime fiction, was soon to be underway. Bored out of her wits by her partner’s long work hours, and passionate of the genre, Shirley Ann-Miller thought the group would provide a suitable alternative to spending an afternoon cooped up in her flat. After a debate on the merits of character versus reality versus puzzles in crime fiction, veteran Bloodhound Milo Motion supplies a copy of John Dickson Carr’s The Hollow Man, intending to make converts of the group with his famous lecture on locked room murders. Only the matter becomes all too real when the Penny Black falls from the book which has never left Milo’s possession or his locked boathouse… and the body of fellow club member Sid shows up under similarly baffling circumstances inside of the locked boathouse. Two impossible crimes in real life, now centered on The Bloodhounds…

Bloodhounds can easily be described as the marriage between a Golden Age puzzler and a contemporary police procedural. The murder in a perfectly locked boathouse, and a spectacular heist of an age-old stamp is straight out of the pages of a novel from the 1930s, but as the book starts to take a more sober stance on the investigation of the problem it’s clear that much of the artificiality (though not all) that makes a lot of locked room mysteries function is missing here. The lock is not a latch that can only be shot from the inside of the room, but rather nothing more than a simple padlock hanging on the outside of the door. And, just like the contemporary police procedural that it is, Peter Diamond does not exhaust himself reasoning out the locked room mystery, spending equal if not more time creating a full picture of his suspects.

While in places this makes the book charming and unique, it also lends itself to some of the books lowest lows and longest slogs that take it well outside of my tastes. A core distinction I’ve found between procedurals and detective novels of the Golden Age is that the former is more about the collection of evidence — individual clues may be misleading, but only misleading in the lack of other information, and as more evidence rears its head, conclusions flow organically from there. The interpretation of the evidence is not complex, and ultimately is not the focus, as it would be in a Golden Age mystery, and even much of the investigation happens in the background with the help of highly specialized police teams. Instead, the focus of the narration is on Lovesey conducting lengthy interviews, crafting complete and thorough profiles of the victim and the people who knew him.

None of that in and of itself is bad. It is simply a separate school of thought in the very broad genre of crime writing, and it is that very breadth that Bloodhounds celebrates. While the heart and soul of Bloodhounds is a procedural, there are aspects of multiple subgenres thrown together that represent the philosophies brought forth by The Bloodhounds. However, the Bloodhounds often struggled, and fought, and the harmony was a perilous and conflicted one and that in and of itself serves as the perfect metaphor for the results of trying to merge so much together in one novel.

The procedural aspects of Bloodhounds, which find their avatar in Rupert, who believes that crime fiction ought to portray a realistic image of crime, caused the crime to often feel incidental to the narrative. Oftentimes when something happened that had dramatic implications and was supposed to totally uproot your understanding of the murder and the theft, it came out of stark nowhere after such a long time of the crimes simply not being in focus that you were confused in the worst possible way, and the impact was dulled and lost.

The Golden Age of Detection was rhapsodized upon by Milo Motion, who thought the puzzle of methods laid out for the reader was the heart and soul of crime fiction. This aspect of the book was hurt by the fact that evidence was often only introduced as it was needed to bring the detectives to the next point of its investigation. While you eventually had all of the information, very rarely was a point introduced and it just have some mystery as to what it means. It usually went that the wrong interpretation was brought forth by the narration, which you frequently didn’t entirely have the ability to correct until more information came later, and when the new information was brought to light the narration would amend its opinion on the earlier clues fairly quickly. The only time you really had much room to work with to puzzle the solution out was between the end of the investigation and the denouement proper, which was only a few chapters. There were some glimmers of earlier fairness, with a lot of small details dotted throughout that the keen reader will definitely pick up on, and that does let the reader get some heads-up on the detective, but not by too far.

The book is as confused about what it represents as The Bloodhounds themselves, and the treatment of the crime and mystery felt weird to me. But it isn’t all bad, and despite all of what I’ve just said I think the book has plenty to offer readers. The characters are all fully realized, and more than mere archetypes. The dialogue is often witty enough to earn an audible laugh. And though The Bloodhounds do sadly get phased out of the picture as a group later in the book, with Shirley even inexplicably disappearing as a second narrator, when they’re together, the debates they have are homely and familiar. Much of their talks are well-researched and leaves the reader with plenty of books to chase down. The seasoned reader of mystery novels will likely find themselves thinking they’ve had this conversation before on more than one occasion. And though the way the mystery handled itself was confused, the solution was not, with solid reasoning and a satisfying resolution to every question and problem, bar perhaps the locked room problem itself was not entirely fair outside of being “the only possible solution”, and it was only a somewhat more clever twist of a fairly tired solution type.

All in all, I’m not super passionate about Bloodhounds as a mystery. As Milo Motion himself said, mysteries nowadays are more about the characters than the crime, and the same can be said for this novel. While it tried to strike a delicate balance, with a complex criminal plot one can see coming straight out of Christie or at the heart of it plot, it often leaned too far on one side for the merge to be totally seamless. But there’s a clear lot of love for the genre here, and when it works, it works! It has its low points, but when it matters the book can pull the reader back in, and it ends on a very high note. The book is very nearly fairplay, but in an odd way, and the crime is complex even if it isn’t the essence of the narrative.

Bloodhounds is an easy recommend for people who want more character from their convoluted criminal plots, or who wants a more sober take on the Golden Age puzzle.

Murder in the Maze by J.J. Connington 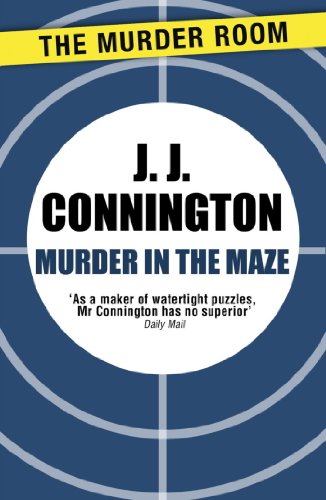